HumanRights360 is a civil society organisation established in Greece whose work is grounded in the belief that the cornerstone of integration is access to fundamental human rights. It is only by protecting the individual, political and social rights of the whole population and by ensuring access to rights and justice, that we can achieve social cohesion. Thus, HumanRights360’s mission is to protect and empower the rights of all, without discrimination and with a special focus on the most disadvantaged and vulnerable populations.

In 2016, following the closure of the borders at the “Balkan-route” and the adoption of the EU-Turkey Statement in March 2016, Greece returned to a widespread use of detention. Administrative detention was gradually resumed to persons in view of their removal based mainly on public order grounds which is usually not properly justified as well as the danger of absconding. In general, administrative detention is implemented without prior individualized assessment on each case and without taking into consideration the vulnerabilities and specific needs of each individual, in contravention of the international, European and national legislation, according to which the administrative detention can be implemented only as a measure of last resort, following an individualized assessment as well as the prior examination of the possibility to implement alternatives.

In addition, detention facilities are overcrowded, and the detention conditions are most of the times inappropriate (inadequate access to basic services, poor provision of medical and psychosocial services) or even completely unsuitable, while many persons remain in Police Stations for long periods (even for months) under very challenging conditions (no yarding, no access to basic services).

Furthermore, many third country nationals are being detained for long periods, however with no prospect of being returned due to various reasons (return is impossible, consular authorities do not cooperate, economical obstacles etc.). In such cases, following the exhaustion of the time limits for detention (without being returned), individuals become “foreign nationals without legal documentation” at risk of being detained again.

Following the elections and the change of the government in July 2019, the Ministry of Migration Policy was dissolved, and its mandate was transferred to the Ministry of Citizens and Protection. Simultaneously, a new law concerning the burning issue of International Protection in Greece was adopted on the 1st of November 2019 after a period of various leaks concerning the provisions of this law.

The rationale behind the law is to build a cursory system on international protection, aiming at the dramatic increase of returns, which does not rely on personalized examination of claims or safeguard and promotion of the fundamental rights of asylum seekers. Instead, the law seeks to introduce procedural barriers and complex procedures to discourage persons seeking international protection while reducing the substantive and procedural safeguards that exist to date. Taking into consideration Greek Asylum’s Service statistics on refugee status recognition rate in conjunction with police data on returns, we can safely assume that in the coming period we’ll see the undocumented population with no timeline for removal further increasing.

On top of that, many cases of persons becoming undocumented are identified as extremely vulnerable (e.g single mothers with children, former domestic violence victims, etc.) with limited supporting social network. These individuals are unable to ensure their welfare, and refrain from accessing food banks due to fear of arrest.

The law has been built on a framework that is based on the widespread enforcement of administrative detention of asylum seekers over long periods of time, even for vulnerable persons. Furthermore, it includes many punitive provisions that could lead to the rejection of the asylum application and it foresees excessive disproportionate consequences, as it requires asylum seekers to comply with ‘cooperation tasks’ with the authorities. These – in some cases – are humanly impossible to respond to, as a result of the system’s malfunctions.

In addition, a new and stricter directive defining more countries as safe countries of origin has been published by the Asylum Service. On 15th of January 2019, the Ministry of Migration Policy which was originally established in 2016 and abolished on 8/7/2019, was re-established. The latter has caused a malfunction to the competent directorates pending the transmission of their mandate from the Ministry of Civil Protection which was responsible following the abolishment of the Ministry of Migration Policy.

There is an urgent need for the implementation of community-based alternatives to detention in Greece. Accordingly, the project aims to build upon the already established cooperation with the Council for Integration of Migrants and Refugees (Municipality of Athens) and the good coordination with other NGOs in the field  to identify clients and provide individualized assistance to 40 TCNs whom asylum claim has not be accepted and/or undocumented population under specific inclusion criteria. Following HumanRights360 selection process in compliance with the relevant law one case worker and one legal expert shall implement the screening and the individualized case management process in coordination with the advocacy officer.

Taking into consideration the above legislation changes and the fact that in Greece detention drives is political, we met with police authorities after the adoption and implementation of the new law to announce the project and with the aim of:

(a) mitigate the risk of non-cooperation of the authorities both in the view of insufficient knowledge of the amendments of the new legislation and in the view of a negative attitude towards the reactions which this law created to the actors at the field;

(b) let the authorities determine the need of congestion to the already overcrowded detention centres and;

(c) build trust with the authorities.

Undertaking the implementation of this project HumanRights360 aims to address, in some pilot scale for the time being, the needs of all the targeted population residing in Greece under our social integration service. The screening, the individualized case management approach and the advocacy through doing are the main tools for the implementation of all of our actions in the social integration service in order to provide the better case resolution and respecting every person’s willingness to schedule their lives.

Thus, this project is expected to also increase our capacity to provide a holistic and individualized support to all targeted population taking into consideration its specific needs and to advocate respectively by providing evidence. Most of the cases need time to be concluded (e.g whenever we have to face judicial issues or difficulties with health issues etc). Thus, there is the risk for some cases to be concluded after the expiration of the project. HumanRights360 shall conclude with the cases which we have undertaken but the stability in the funding would be very helpful to better organize and elaborate our strategy on ATD, since it is not very easy to shift the mentality from the beginning and reserve the trust without further implementation.

The pilot is successfully building relationships with authorities, including through informal discussions with the Police directorates. Following positive feedback from the latter, the team has recently submitted a request to the Police Headquarters for permission to access Pre-Removal Detention Centres.

Even though authorities are not willing to speak openly for alternatives to detention as such, they have identified the need of a solution to the overcrowded detention centres and are taking into consideration the model of individualized cased management aimed at case resolution as a potential option.

NGOs have also identified the need of another approach, beyond the legal assistance in order to enhance the implementation of alternatives to detention but still face this approach with reluctance. In the next period, with full implementation of the case management we shall be able to provide more evidence to broaden out the discussion.

Article – At the front line in Europe: testing alternatives to detention in Greece and Italy 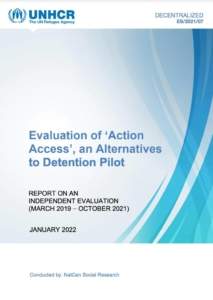